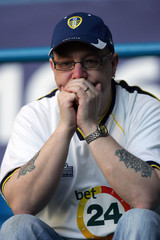 Leeds United have been relegated to League One after being deducted 10 points for going into administration. The 10-point deduction means Leeds will finish the season bottom of the Championship, below Southend and Luton, the other two relegated clubs.
On the positive side, Leeds will not lose any points for the start of their first season in League One. Administrator KPMG has agreed to sell the club to a newly-formed company led by chairman Ken Bates.
From the Champions League semi final (against Valencia) in 2001, to League One in 2007 â€“ this episode is the sorry culmination in a spectacular fall from grace. Leeds ran up huge debts between 2000 and 2003 under chairman Peter Ridsdale. Ridsdale left Leeds in April 2003, with the club more than Â£100m in debt. Leeds still have a huge fanbase but there is a massive rebuilding job aheadâ€¦
[Photo: Getty Images]