It looks like Andrea Pirlo will be bowing out alongside Frank Lampard at New York City FC, that’s if the New York Post are to be believed.

According to the Post, Pirlo has all but agreed to join NYCFC with a – and we quote – “MEGADEAL” in place to bring the 36-year-old to MLS from Juventus, who have already signed Sami Khedira from Real Madrid as the veteran’s ready-made replacement.

Nothing has been officially rubber-stamped yet but “the deal is essentially done” and will be formally announced on Friday or thereabouts.

Meanwhile, Pirlo has been snapped at Yankee Stadium, taking in something called ‘Old-Timers’ Day’ from a suite while nattering away with NYCFC chief executive Ferran Soriano…

This from the Post’s report:

“The Italian maestro will join NYCFC in a star-studded lineup, after the free-spending club already handed $6 million deals to aging stars David Villa, 33 and Frank Lampard, 37.

As if you needed any more concrete evidence that the deal has been struck, Pirlo’s son Nicolo then went and posted the following image on Instagram… 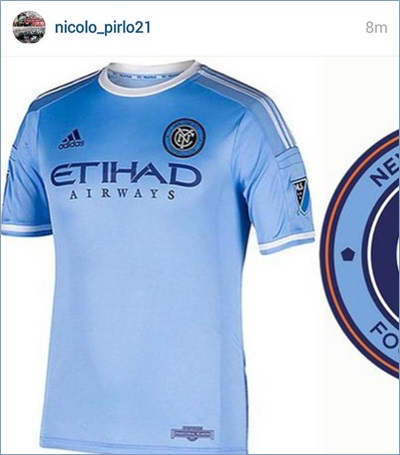 Yep. That’s as good as the old scarf-aloft-in-an-empty-stadium photo as far as we’re concerned.