After contributing the square root of Sweet Fanny Adams to the cause since Corinthians somehow managed to milk £17million out of Tottenham for him in 2013, Paulinho is now currently on the verge of completing a move to Guangzhou Evergrande, the Chinese Super League side managed by Phil Scolari.

The news has come as a blessed relief to most Spurs fans, who simply seem glad to finally see the Brazilian wage hoover being stuck from their books.

However, having noted that Paulinho’s move to Evergrande also reportedly involves a massively unwarranted £30,000-a-week wage hike (from £60,000-a-week up to £90,000), one dilligent Tottenham fan by the name of Billie did the right thing and reported the ‘suspect activity’ to Barclays bank – the principal sponsor of the Premier League… 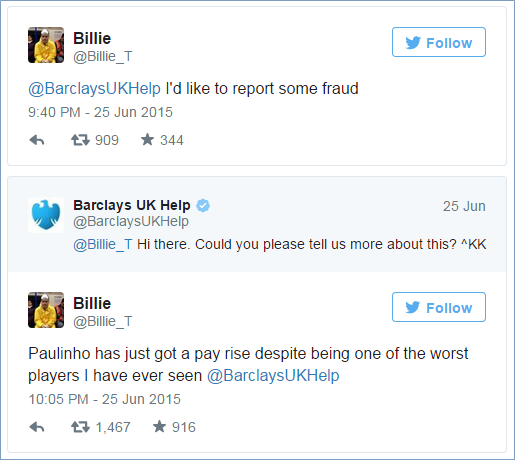 Trollolololol, as the kids almost undoubtedly don’t say any more.