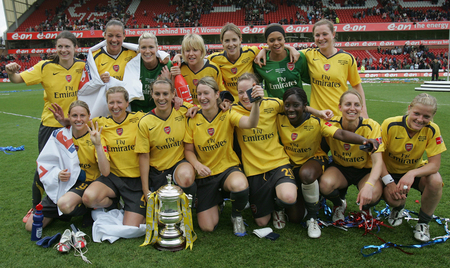 Let’s hear it for Arsenal Ladies! In winning the Women’s FA Cup at the weekend (4-1 against Charlton Women), they completed an unprecedented quadruple (League Cup, Premier League, FA Cup and Uefa Cup). In other words, they did what Chelsea’s men couldn’t. Many congrats to all concerned – a fantastic achievement.
It was also very encouraging to see that a crowd of almost 25,000 turned up at Nottingham Forest’s City Ground to watch the FA Cup final – that’s double the previous record crowd for a women’s FA Cup final. [Photo: Getty Images]