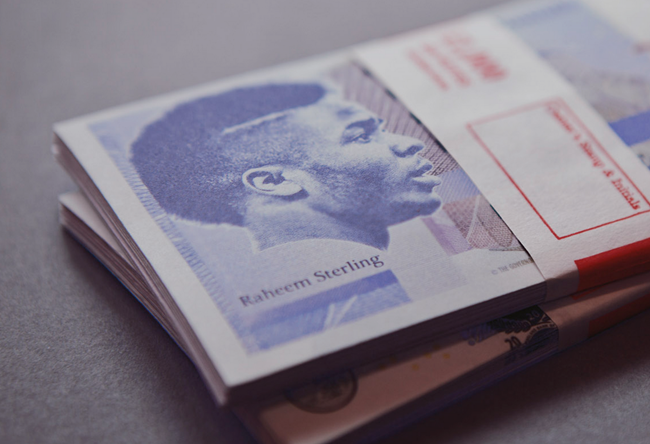 Just when we thought we were out, the Raheem Sterling vortex goes and sucks us right back in.

A couple of intrepid young pranksters have launched a campaign to make Man City’s new £49million trinket the new face of the English £20 note.

Simon Connor and Stephen Cross are hoping to corral people into voting for Sterling en masse on the following grounds:

3. HIS EXTORTIONATE TRANSFER AND WAGES PROBABLY EARNED THE BRITISH ECONOMY A GENEROUSLY LARGE WINDFALL IN TAX

4. HIS NAME SOUNDS AWFULLY LIKE THE NAME OF OUR CURRENCY

Should you feel the compulsion to participate, you can submit a vote for Sterling by visiting the duo’s Crossconnor.com website.

“But only with the support of the entire football community can we make the Bank of England seriously consider our proposal”.

Stephen, a Gooner by trade, added:  “The Bank of England say they won’t feature living characters but we think they should make an exception.

“The timing is perfect, he shares his name with our currency and in one deal has probably just earned the country a huge sum in tax”.

The vote closes this Sunday (July 19th) so we’d suggest you get a wriggle on if you’re remotely arsed.