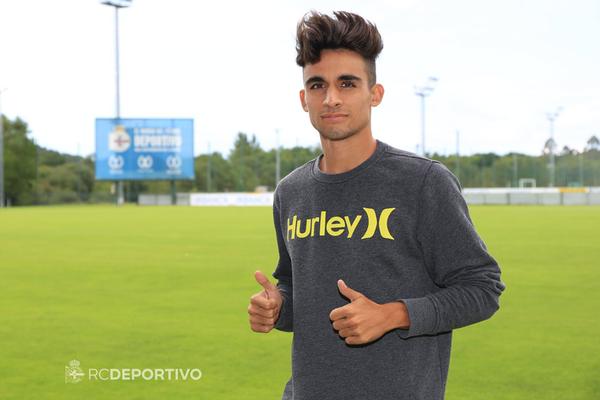 “What’s got two thumbs and has just learned a valuable life lesson the hard way?”

Having spent the entirety of his young career bobbing in and around the Spanish fourth tier, it looked all but certain that Julio Rey was about to secure his big move to Deportivo La Coruna over the weekend – in fact, as you can see, Deportivo even had Rey’s official unveiling portraits taken and everything.

However, despite a being deal agreed and the welcome mat being laid out, Rey still saw his transfer fall through after somebody in the Deportivo camp went a-trawlin’ back through the 20-year-old winger’s Tweets to check for anything scurrilous.

Sadly for Julio, they stumbled across this little gem from 2012. Loosely translated, it reads “F**K DEPOR, F**K RIAZOR” (Depor being the club he was on the brink of signing for and Riazor being the stadium they play at)…

The club emitted the following statement on their official website:

“Real Club Deportivo, who announced the signing of Julio Rey in the afternoon after the player signed his contract with the club, have decided to cancel the transfer after analysing an unfortunate comment on the player’s person social media profile several years ago.”

“[Deportivo] believes that a player deserves to wear the blue and white shirt if he’s an example of sportsmanship, respectful of their rivals, committed and has positive feelings toward Depor, it’s colours, it’s crest and those values that represent this institution.”

Seems incredibly harsh to punish a promising young player for something rash he blurted out as a 17-year-old, but hey-ho – Deportivo obviously have standards to maintain.

(Via Inside Spanish Football)