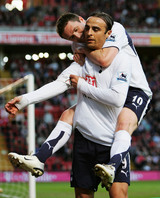 Phew, after the immense shock of seeing Tottenham’s rubbish new kit, I could do with some positive Spurs news. And here it is: Dimitar Berbatov, the best player in the whole world (or at least the best Bulgarian) is reportedly set to stay at Spurs for another season.
The player’s agent, Emil Dantchev, said in April that Berbatov would remain at White Hart Lane for a minimum of another season and yesterday confirmed that: ‘Nothing has changed – except for the number of goals that he has scored,’ he said. ‘He is very happy with Tottenham.’
Being very happy somewhere doesn’t mean you won’t move on, and I always expect agents to attempt to cash in on players who are widely coveted, but my gut tells me that Berbatov will still be a Spurs player come the start of the 2007/08 season. Yay.