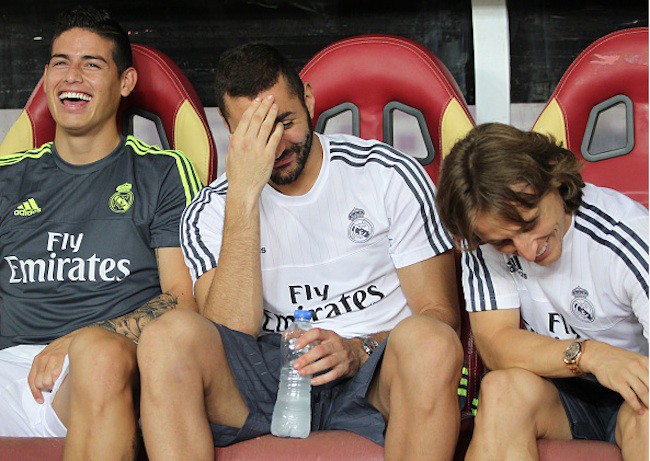 Benzema has been moving to Arsenal at a glacial pace for years. But now the Daily Telegraph says he’s coming – today! Apparently the Arsenal board have jetted to Madrid to sign the player. Real Madrid will trouser £35million for the 27-year-old French striker, who will earn £120,000 per week. That’s less than Theo Walcott gets!

The Telegraph is surely talking rubbish.

If anyone out there is looking for a clue, then how about this one on Benzema’s official website. The site’s in French. But it will be in English – “soon”…

As Gooners go into paroxyms of delight, a flick over the Spanish flag revels that Benzema.com will also soon be in Spanish…

But to the media everything is “cryptic” nothing ever straightforward. The Standard cocks an ear to the Arsenal Press conference and hears Arsene Wenger respond to questions on the striker. He says: “I never came out on Karim Benzema. It is just media talk.”

Which is interpreted in the Daily Mail as: “Arsenal boss Arsene Wenger refuses to rule out striker transfer.”

The Birmingham Mail says Spurs striker Emmanuel Adebayor quite fancies a move to Aston Villa but doesn’t want to live in the Midlands. Villa manager Tim Sherwood continues to flick through his little black book and has offered £5million for Spurs winger Aaron Lennon, 28, says The Sun.

The Daily Mail says West Ham will take Atletico Madrid’s 24-year-old striker Raul Jimenez on a season-long loan having secured his work permit. West Ham are keen to sign Liverpool’s Fabio Borini (The Times). However, the Hammers’ plans to sign Inter Milan defender Danilo D’Ambrosio, 26, have stumbled over his personal terms after the two clubs settled on a £9million fee for him, says Talksport.