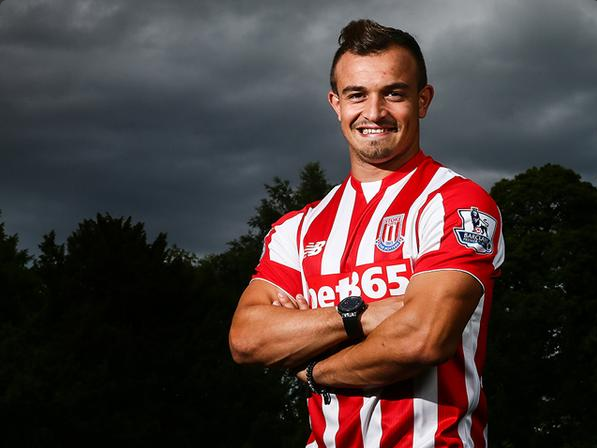 Bayern Munich legend Stefan Effenberg has had a right old go at Xherdan Shaqiri for having the cheek, the downright temerity to sign for Stoke City.

Prior to his one-season stop-over in Serie A, the Swiss winger spent two-and-a-half largely underwhelming seasons at Bayern, where he failed to hold down a regular first-team spot for any significant period of time.

Regardless, Effenberg (who is famously not shy when it comes to spouting off) has gone on record as saying that Shaqiri’s move to Stoke is generally ill-advised and that the player will come to regret his decision to chase the coin to England rather than return to the humble yet oh-so-rewarding environs of the Bundesliga.

I do not understand Shaqiri’s move to Stoke at all. You have been badly advised if you go there.

You have to ask yourself where you can reach your sporting goals as a footballer.

That should be the challenge. Schalke would have been perfect for Shaqiri.

Earning €1million more or less should be irrelevant. When you can make €6million at Stoke or €3million at Schalke, you pick the latter.

You play Bundesliga football in a great stadium, get your desired return to Germany and play for a great club that you can help move forward.

But Stoke? Come on, I cannot understand the player, his agent, his parents or his brother.

This is a shame and a sad state of affairs. Only because they are throwing around cash? Is it really all about money for footballers these days?

There speaks a man who obviously hasn’t sampled the sheer delight of a ham and cheese Staffordshire oatcake.