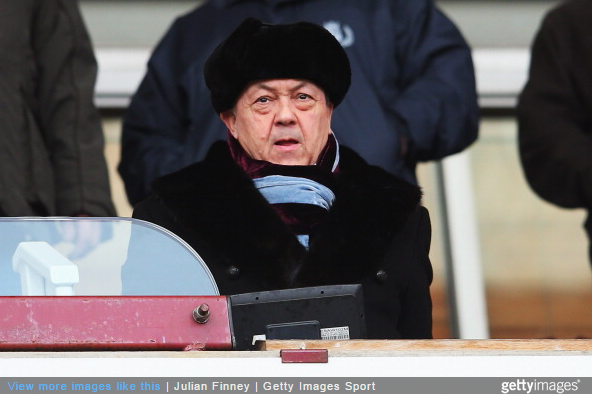 West Ham will not be signing Charlie Austin any time soon, especially if Hammers co-owner David Sullivan has anything to do with – which he does.

With a clutch of Premier League sides sniffing around Austin’s rear end at the moment, Sullivan has announced that West Ham are officially pulling out of the race to sign the QPR striker after catching word on the grapevine that his knees are shot.

Or at least *were* shot, two years ago; the last time anybody checked.

Speaking on the Knees Up Mother Brown Podcast, Sullivan waffled:

Firstly, we haven’t got £15million to spend under the Fair Play rules. Secondly, he failed a medical at Hull a couple of years ago. They say he has no ligaments in his knee, who knows? To sign a player for £15million is a big risk.

He could go on for years, but knowing our luck his knee will go in his first game and that’s the end of it!

And he didn’t keep Queens Park Rangers up. If he’d kept them up single-handedly you might say it was different – and a few of those goals were penalties.

16 goals is still very good, but when we played Queens Park Rangers last year they had to win to stand any chance of staying up and he wasn’t very good.

To be fair, after the Andy Carroll debacle, it’s understandable that West Ham might have a thing about signing expensive injury-prone English strikers.

However, Sullivan also appeared to be equally unenamoured with the prospect of signing Alex Song, shortly after agreeing a deal to re-sign the Cameroon midfielder from Barcelona:

We just hope the medical shows [Song] is in a sufficient state for us to gamble.

He couldn’t physically pass a medical tomorrow, but if the medics say it’s just a technical thing and he’s only a couple of weeks away you’d take that gamble and hope they’re right.

It (a three-year deal) is a huge commitment. He’s a big earner.

That’s the spirit, David! Any kittens you want stamping on while we’re here?