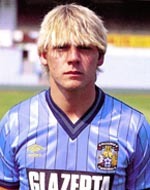 Does the Monday craziness never end? First Paul Jewell keeps WIgan up but then he resigns. Now Man City, who finished four points above the relegation zone, have sacked Stuart Pearce! Pyscho hasn’t proved he can cut it as a manager at the highest level and I think it would do him good to get some experience at League One or Championship level.
So what does this mean for out-of-work managers like Chris Coleman and the mighty Sven? It means their agents will be straight on the phone to Man City, that’s what.
In other news, assistant boss Chris Hutchings has been appointed as Jewell’s successor. Not exactly a high-profile name to excite Wigan’s fans, but probably a prudent choice, as Gordon Brown would say.