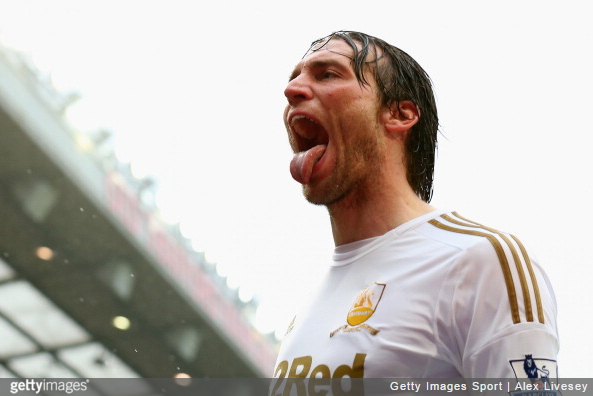 Not so very long ago, back in 2012/13, Miguel ‘Michu’ Perez Cuesta was one of the hottest properties in the Premier League.

Having joined from Rayo Vallecano for just £2million, the gangly Spanish forward scored 22 goals that season as Swansea were repeatedly forced to fend off flirtatious eyelash-flickering from the likes of Arsenal and Manchester United.

Indeed, his form was so prolific that Michu even forced his way into the Spain national side in October 2013, starting in a World Cup qualifier against Belarus.

Sadly however, a spate of injuries saw his powers wane almost overnight. A loan move to Napoli last season was blighted by repeated knacks and niggles. Upon, his subsequent release by Swansea in November, he’d last played competitively for the club in April 2014.

The latest update is that the 29-year-old has agreed to join UP Langreo, the Spanish fourth tier side he’d been training with since returning to his native land.

Langreo also happen to be managed by his brother, Hernan Perez.

The club announced their new signing on Twitter, adding that Michu will officially join them when the winter transfer market opens in January.

Here’s wishing him luck. He was so close to carving out a top-level career, but his body let him down.