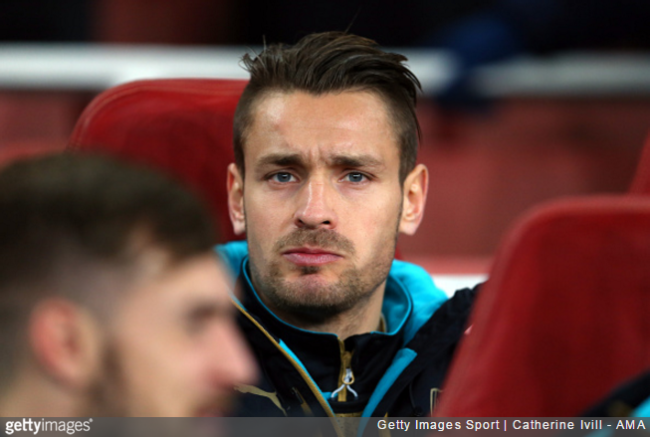 Mathieu Debuchy has downed tools and proclaimed he can’t possibly stay at Arsenal a moment longer as he watches his place at Euro 2016 continue to slide out of view.

The French right-back joined Arsenal in a £12million move from Newcastle some 18 months ago, but subsequently returned from a long-term injury to find he’d been usurped in the pecking order by Hector Bellerin.

Now, having made just seven appearances so far this season, Debuchy is whittling about his international future and is seeking a move away – and anywhere will do by the sound of things.

Speaking to L’Equipe, he revealed that he’s been in talks with Aston Villa coach Remi Garde about joining the Premier League stragglers in a dream move before the end of the month:

It’s true, they are among the teams interested in me. I am currently studying everything but it’s not a possibility I have excluded.

Whatever happens, even if it is to return this summer and then start again, I have to go this winter. I cannot stay at Arsenal.

Asked if he regretted not jumping ship in the summer, the 30-year-old replied:

Yes, I clearly lost six months. I would have preferred to leave last summer but the coach told me I would have my chance – it was not the case.

I do not know who is responsible. Last year I got injured and I’ve been away a long time and Bellerin played some good matches. This summer, I had a good preparation and I was able to resume the season – but the coach decided otherwise.

It is very hard, I went through difficult times. This is the first time I find myself in this situation. Playing a match every two months, that’s not possible.

He definitely had flickers but it’s fair to say that Debuchy was probably never going to develop into a full-on Arsenal calibre player, especially given his steadily advancing years.

With Bellerin really starting to blossom, we can’t imagine too many Gooners will be overly upset at seeing Debuchy mope out of the back door come February.