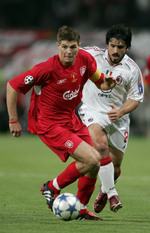 AC Milan boss Carlo Ancelotti has accused Steven Gerrard of talking ‘bollocks’ ahead of tomorrow’s Champions League final in Athens. Gerrard famously claimed Milan prematurely celebrated victory at half-time in the 2005 final when they led Liverpool 3-0.
But Ancelotti hit back, telling The Current Bun: ‘There’s only one word to describe what Gerrard says about our so-called celebrations – bollocks! We lost our heads in those six minutes when we let Liverpool come back from 3-0 down. But what we actually did at half-time was to tell ourselves there were 45 minutes to go and we needed to carry on playing as we were.’
Gerrard’s accusations have also been denied by midfielder/singing midget Gennaro Gattuso, who was branded ‘a kitten’ in Stevie G’s autobiography. Gattuso said: ‘If Gerrard says I am a kitten then I must be an ugly, bearded kitten. But I will not respond to these provocations. Gerrard’s a great player and my only answer to him will be on the pitch.’
More fuel for the fire. Boy, I can’t wait for tomorrowâ€¦