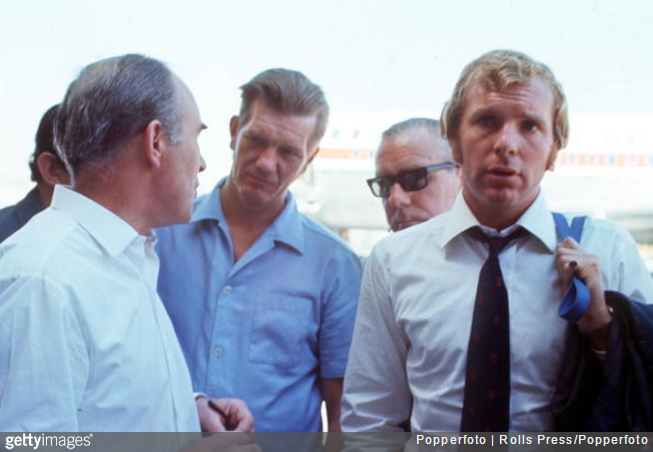 In possibly the most famous diplomatic incident in football history, 18th May 1970 saw England captain Bobby Moore accused of half-inching a bracelet from a store in Bogota, Columbia, while on a shopping trip with Bobby Charlton.

With England in town as part of their training regime for the World Cup in Mexico, the pair were shopping for a present for Charlton’s wife at the Green Fire shop inside the Tequendama Hotel when the owner accused Moore of walking out of the shop with a £600 bracelet stuffed in his pocket.

Such was the escalation of the row, that British prime minister was forced to step in and urge a diplomatic intervention. 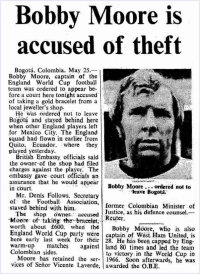 Moore was conditionally released 10 days later, shortly before England’s first group game, after being granted “unconditional freedom” by the Bogota Superior Court. That said, it took two full years before the case was formally closed.

The incident gave rise to a conspiracy theory that Moore was intentionally framed in a bid to disrupt England’s World Cup preparations. Bogota chief of police Jaime Ramirez even hinted that an eye-witness had been paid off and that Moore had been the victim of a blackmail attempt.

Anyway, the long and short of it is that Bobby Moore was innocent, though many other footballers have been proved otherwise over the years.

In 2007, Glen Johnson, then at Portsmouth, was busted – and presumably flushed – after he and Millwall’s Ben May were discovered stealing a set of taps and a toilet seat from B&Q.

In 2003, Vinny Jones took the hard man act a bit too far while on a flight from London to Tokyo. He threatened another passenger, got into a fight with cabin crew and was heard to shout: “I can get you murdered, I can get the whole crew murdered for £3,000.”

Despite the flouncy kit, former Arsenal and Fulham star Peter Storey was what they refer to in the trade as “old school”. He served three years for involvement in a gold counterfeiting plot and also landed a six-month suspended sentence and a £700 fine for helping to run a brothel. Quite the business portfolio.

Duncan Ferguson was not a man to be messed with. Throughout his career, the man tagged “Duncan Disorderly” was convicted of assault four times – twice at taxi ranks, once in a pub during a scuffle with a fisherman, and once for a head-butt on Jock McStay of Raith Rovers.

That one landed him a three-month prison sentence.

It’s fitting to finish on a redemptive story. Jamie Lawrence was serving four years for bank robbery when he was spotted playing for the prison team by Cowes Sports FC from the Isle of Wight.

They signed him up, and he eventually caught the eye of Terry Butcher, who was then managing Sunderland.

Lawrence then worked his way up and enjoyed a fair bit of success at Bradford City, who he helped win promotion to the Premier League in 1999 – the club’s first return to the top flight in 77 years.