The 25-year-old Kanté was a star performer in Leicester City’s shock title victory last season while he also lined out for France at Euro 2016. However now, the tough-tackling midfielder has decided to join Chelsea on a five-year-deal.

Kanté initially joined the Foxes from Caen last summer for just £6million. However, after blossoming in England, it was inevitable that the Premier League’s big guns would come sniffing around.

Speaking about his move, Kanté said:

I am so happy to have signed for one of the biggest clubs in Europe. It’s a dream come true for me.

The opportunity to work with Antonio Conte, a brilliant coach, and some of the best players in the world was simply too good to turn down.

The £30million fee is a club record for Leicester, who released their own statement after transfer was finalised. 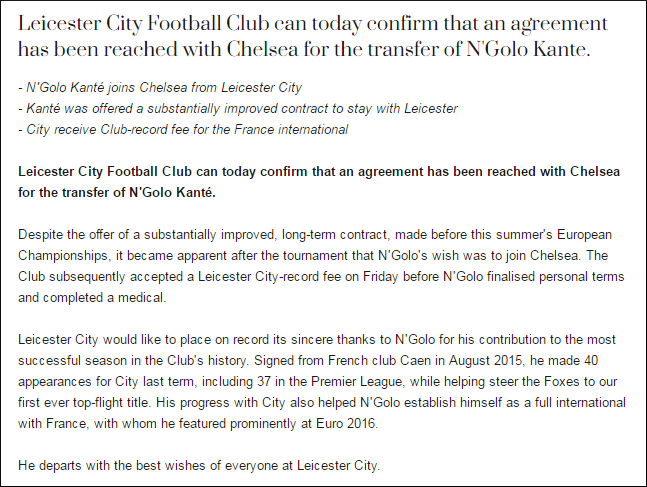 Leicester boss Claudio Ranieiri will no doubt be disappointed to lose such a pivotal star, although the Italian will be hoping that combative midfielder Nampalys Mendy, signed from Nice earlier this summer, can fill Kanté’s boots.

As for Chelsea, the arrival of the French star at Stamford Bridge could mean the departure of Nemanja Matic, with Juventus apparently interested in the Serb.