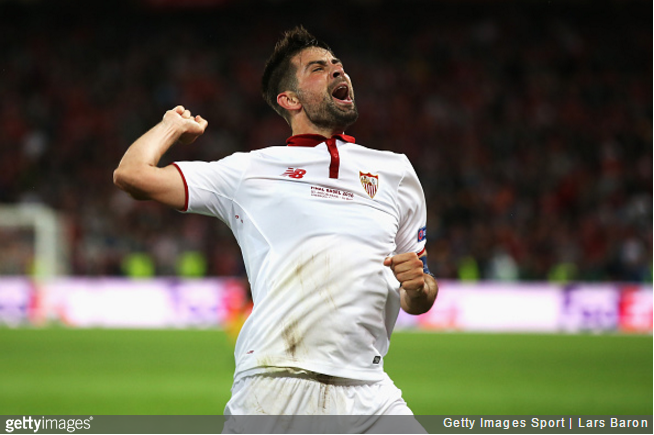 Having made well over 100 appearances and won three Europa League titles in five years at the club, it was announced very recently that Sevilla club captain Jorge Andujar Moreno – more commonly known as Coke – will be moving on to pastures new this week.

Coke’s departure is part of a mass exodus being overseen by new Sevilla coach Jorge Sampaoli who, after sanctioning the sales of Ever Banega, Jose Antonio Reyes, Grzegorz Krychowiak, Ciro Immobile and Kevin Gameiro, is currently knee-deep in the process of flushing out the old squad and replacing it with one of his choosing.

Speaking at Coke’s farewell press conference, Monchi said this of the 29-year-old full-back:

Today is a difficult day. I have sold many players and many of the transfers cause doubt, but about this one I am sure that something isn’t going well and we didn’t get it right.

I have a bad taste in my mouth because in this transfer we made a mistake, we have lost someone who is very important.

To which Coke himself added:

I have had a funny feeling over the past two days, my heart doesn’t feel like it is in the right place.

As I have said, the career of a player is short. I feel that this is what I have to do, but it gives me great sadness to leave all this behind. I will always keep Sevilla close to my heart.