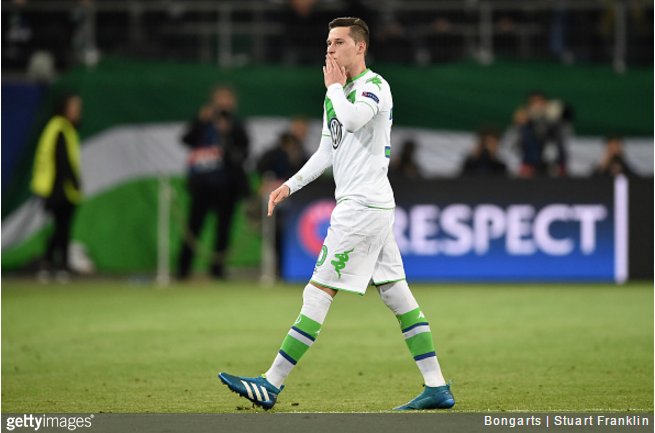 If this morning’s transfer tittle-tattle is to be believed, Julian Draxler has informed Wolfsburg that he would like to try his hand elsewhere.

Having only signed last July, Draxler still has four years left to run on his contract at Wolfsburg but, as revealed in an interview with Bild, the 22-year-old forward has an agreement in place that would allow him to talk with “top international clubs” should they come a-sniffin’.

Draxler also added that he was provoked into going public with the terms of his supposedly-clandestine gentleman’s agreement after coach Dieter Hecking recently told the press the German international would definitely be staying this summer.

I am surprised that matters regarding my future are being communicated in the media. I expected that to go differently. For example that someone approaches me and asks me for my views instead.

We shortly texted. I talked on the phone with coach Hecking. Two days after the semi-final at Euro 2016 I explained my point of view and expressed my wish that I want to leave the club.

Now I’m back in Germany and things are being communicated via the media rather than with me in person. Now I also wanted to make myself heard.

When I transferred to Wolfsburg in 2015, we had a verbal agreement that I can leave the club when a possibility emerges. With Dieter Hecking as well as (sporting director) Klaus Allofs.

It was set between all persons involved that I could leave for an international top club when the chance presents itself. It was agreed that we would have reasonable talks, if other clubs show interest.

It’s further suggested by Eurosport (among several other sources) that Arsenal are now hovering over Draxler again after first showing interest in the youngster during his time at Schalke.

Apparently Arsene Wenger is keen to convert him into an out-and-out centre-forward and may well submit an offer as Premier League clubs continue to plunder the Bundesliga this summer (11 players have already left Germany for England since June, with £169million in transfer fees changing hands so far).

However, given his contract situation and the fact that he cost Wolfsburg £25million less than a year ago, it’s probably going to be a pretty bloody costly affair, with Juventus also being mentioned in passing.

Serie A it is then.