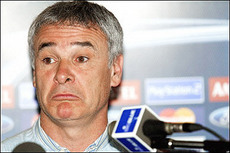 Bad news for Man City fans hoping to see Claudio Ranieri transform their club’s fortunes next season – it’s just been announced that Juventus have appointed the Tinkerman as their new coach. Ranieri resigned as Parma head coach last week and had been strongly linked with the vacant City job.
Does this open up the way for Sven-Goran Eriksson to take his first Premiership job? Despite Sven’s less-than-satisfactory time with England, I still rate him as a good club manager, and he would surely be a big improvement on Stuart Pearce, who was not ready for a job in the top flight.