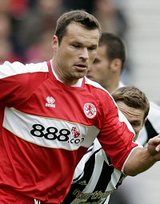 Newcastle Utd have agreed ‘in principle’ to sign big-boned Boro striker Mark Viduka. The Aussie, still only 31, has been offered an extended deal by Gareth Southgate but has yet to decide if he will stay at the Riverside, according to the Beeb.
Portsmouth, West Ham & Birmingham are also reportedly keen on the hot-and-cold striker – but if I was Viduka, I’d definitely choose St James’ Park. I like the cut of Sam Allardyce’s jib and I think Viduka would make a great big guy in a ‘big guy-little guy’ strike partnership, with either Oba Martins or Little Mickey Owen. Would you welcome Viduka’s arrival, Toon fans?