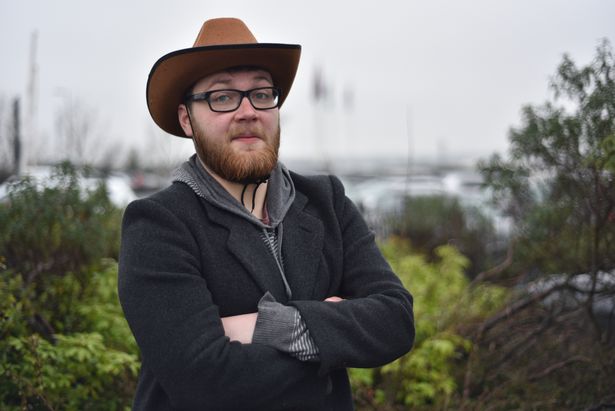 Amidst all the deal-making and the rumour-churning, a new hero emerged on transfer deadline day, and his name was (and still is) Jacob South Klein.

That’s him up there, in the little brown cowboy hat.

For the past few years, Reading fan Klein has spent deadline day lurking in the bushes outside Madejski Stadium and updating fellow supporters on the various comings and goings.

‘Bushwatch’ began three years ago when Klein was “very bored and very unemployed” – and now, thanks in part to a bumper instalment on Tuesday, it’s become a bit of a big deal.

Indeed, Reading made three decent signings on deadline day, and Bushwatch was there, camped out in the car-park, to break them all.

As momentum began to build, a succession of fans began to turn up to Bushwatch HQ with deliveries of snacks, coffee and even a complimentary mojito.

Reading themselves also provided a few refreshments, in the guise of a meat pie and a can or two of disgusting Thai energy drink…

I do love my club. Thanks for the #BushWatch pie, @ReadingFC. pic.twitter.com/IDlrIL4IJx

As the day wicked away, Jacob whiled away the quiet hours by conducting a few phone interviews for radio and the local press.

Well @JacobSouthKlein has just answered his phone to a presenter, and straight away asked if “I’m on air”. This is #bushwatch #LIVE #bushy pic.twitter.com/E8wJ7CMGt2

However, just before close of play, Reading went an sprung another signing, bringing in Lewis Grabban (at least we think that’s Lewis Grabban) from Bournemouth…

And, with his work done for the day, the Bushman retired to his chambers…

Sleep well, sweet prince, for you have performed a great service this day.

Honestly, we can’t decide if he’s bloody nuts, a true folk hero, or a little bit of both!