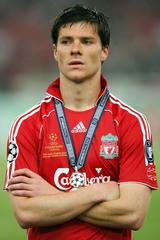 Some good news for Liverpool after last week’s shocker – Xabi Alonso has signed a new deal with the club. The 25-year-old midfielder had been linked with a move back to his native Spain, has he has now committed to Liverpool until 2012.
‘I knew there was interest from other clubs but it was always my idea to stay here. It’s a special club and I just didn’t want to leave,’ said Alonso.
Alonso joins Steven Gerrard, Jamie Carragher and Pepe Reina as the fourth high-profile player to sign a new contract in recent weeks.
‘Stevie, Carra and Pepe are all big players for us and it’s great they have all shown their commitment,’ Alonso added.