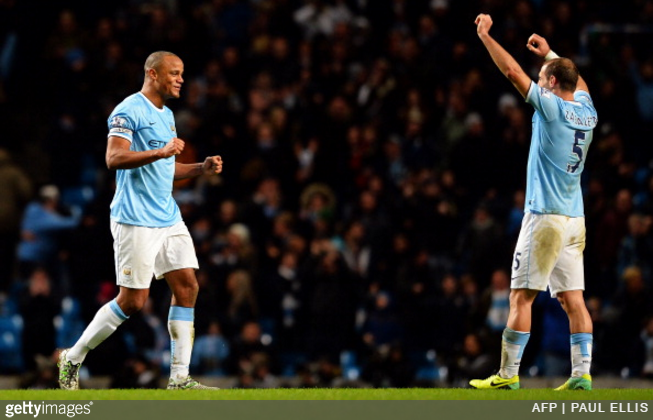 Vincent Kompany has paid heartfelt tribute to Pablo Zabaleta after Man City announced on Sunday that the Argentinian will be released back into the wild come July.

Indeed, City confirmed that, after nine years of fiercely loyal service, the club will not be renewing the veteran full-back’s contract when it expires this summer.

And so it was left to captain Kompany to sing the praises of the ‘true warrior’ he’s spent the best part of a decade fighting alongside.

Indeed, Kompany gave a full homage to Zabaleta while speaking to the press following City’s 2-1 victory over Leicester City on Saturday.

While we’re loathe to use the word “gushing” in any context, the Belgian skipper’s sincere admiration was definitely approaching those levels.

Here’s the full transcript, via Sam Lee of Goal:

Can you explain Zabaleta’s contribution to City over the years?

He epitomises what the fans have loved about City for so many years even before our era.

He’s tough, he gets into challenges where usually he has no right to win them but he gets out on the winning end. More than anything it’s his passion and his commitment to the club.

He’s an exceptional professional and someone who has been extremely reliable. After that you can talk about his qualities because people maybe don’t appreciate what he’s been able to offer going forward over the years. His timing of his runs, the reading of the game and I think he’ll always be remembered for all his cuts and bruises.

We used to play with 10 men for about five minutes per game at some stage because he’d need to go off for treatment! There’s no way I can predict what his future will be, I can only speak about the years we’ve shared together and he’s everything a City legend needs to represent.

Is there one particular injury that stands out?

Yes, but it’s a negative one. I remember him going off against Everton to get his stitches done or whatever, he went all the way back to the dressing room and in the meantime we conceded a goal. So when he got back out, I said next time we need to time this better!

The thing is that the games after that we took into consideration that it might happen again – if we’re down to 10 men just to manage it.

What’s your happiest memory of him?

His first goal against QPR [in 2012] was massive for us. But whether he’s scoring at the end or at the beginning, he contributed in an equal way to us winning our games. Zaba will always be remembered for his tackles and I think that’s what he wants.

His tackles, his headers and the timings of his runs – he has always been impeccable and been able to put himself into positions where he could affect the game, and although maybe his biggest quality was not to dribble past three or four men he got there and put the crosses in.

I’d add one more thing. His presence in big games – even when you’re losing – there’s always a few players you know are going to put in a good performance even when you don’t always get on the right end of it. And he was always one of them. If you need to go to war in the big games, you know you’ve got Zaba with you.

That’s it. You need a guy like Kun [Aguero] to score the goals but sometimes [you need] a last-ditch challenge, which are things that often get forgotten quite easily, but team-mates and players like us we remember those and it’s a feeling that you have.

And with him you have that feeling he could save the game.

Is that what City need in the future?

I think that is what we have mentioned in previous weeks. We have dominated a lot of games, we have a lot of possession and our performances were good but I reckon for the future we need to take some of that hardness, some of that passion, into whatever this team will be in the future – and it will be well past my time – so that has to remain at City.

That is what the fans will always want to see at City. So take a little bit of Zabaleta and add him to the talent we have and we will have a really, really good team.

You and Pablo were here before the takeover in 2008, does that give you a different perspective on the club?

Yeah, maybe. We came here when there were completely different targets. We were happy to win a big game every now and again! We were literally ‘old school’ – go with the lads, have a drink and that was it.

I can’t remember the last time that happened because the team has changed, the pressure has changed, the amount of games has changed but we’re still part of this generation… we played with Dunny [Richard Dunne] so that says everything!

You’ve had the challenge of adapting and proving you can play for a big club?

There’s always been talent at City even when it was a mid-table club. I reckon what we brought in – because we were young then – was a lot of hunger to go that extra step.

And only players like this would survive at this club anyway because of the competition there’s been for so many years now. Even to just be here after so many years and with so many players coming in, it is not an easy job.

And Pablo, you know, did his last start against United and was playing against a young lad with a lot of speed [Anthony Martial] but he’s got so much experience that he knew to get in a challenge straight away and not make it obvious that he is lacking for pace against some players. It doesn’t matter when you have so much experience.

*Sniff* Yep, that’s what it feels like to forge a proper defensive partnership.

While Zabaleta patently hasn’t got the legs to cope with the intense demands Pep Guardiola puts on his full-backs, at 32, some lucky team out there is going to bag themselves one hell of a bargain this summer.