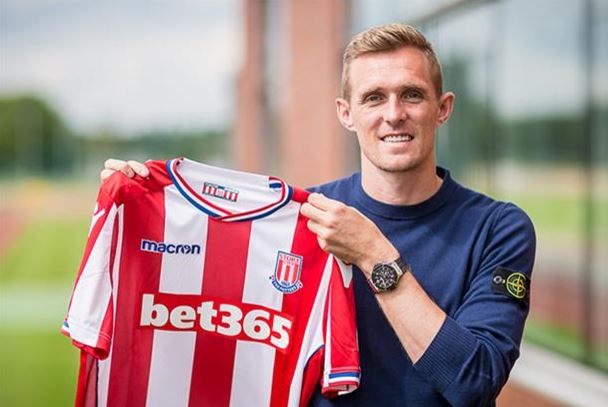 Stoke City has officially unveiled veteran midfielder Darren Fletcher as their first signing of the summer, with the West Brom midfielder joining on a two-year-deal.

The 33-year-old former Manchester United star has been an ever-present for West Brom in their last two Premier League campaigns.

However, with his contract expiring, the Scottish international has decided to swap the Hawthorns for the bet365 Stadium.

#SCFC are delighted to announce the signing of Scotland international Darren Fletcher on a two-year deal #WelcomeDarren 🔴⚪️🏴󠁧󠁢󠁳󠁣󠁴󠁿 pic.twitter.com/A3QbIB2a9k

Fletcher had apparently been offered a new contract by Tony Pulis, but the four-time Premier League champion has instead chosen to join up with Man Utd legend Mark Hughes at Stoke.

On signing on the dotted line at the bet365 Stadium, Fletcher said:

It’s all happened incredibly quickly, but I am delighted to be here.

This is a fantastic Club with a top manager and a great group of players and I am really looking forward to this opportunity.

Despite his advancing years, Fletcher’s consistency and lack of injuries are rather impressive, while his experience will surely be a boost to Stoke both on and off the pitch.

🗣️ Mark Hughes has spoken of his delight after making Darren Fletcher his first signing of the summer #SCFC pic.twitter.com/RgI4NpNqYv

Stoke themselves have rather stalled in recent seasons, despite the influx of a lot of gifted players, with a 13th place finish in 2016/17 a significant underachievement.

However, the likely signing of Fletcher seems like a very shrewd move for the Potters.