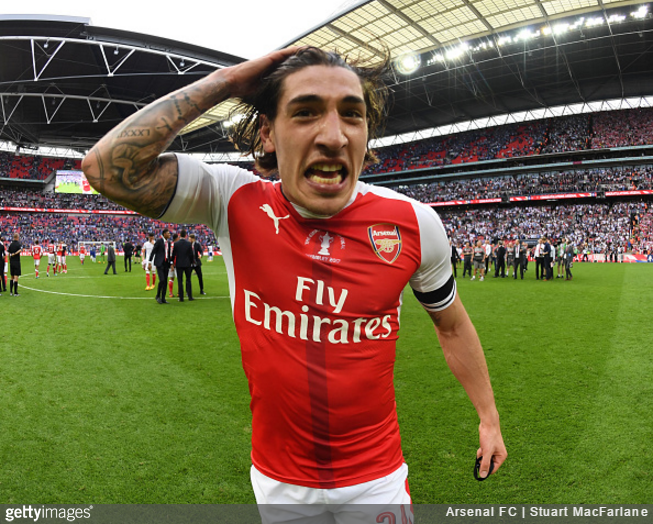 Having previously remained diplomatically schtum on the matter, Arsenal defender Hector Bellerin has broken his silence on the prospect of returning to his boyhood club, Barcelona.

Bellerin has always made a point of nipping talk of a return in the bud, but his latest interview with Catalan newspaper Mundo Deportivo appears to show a tangible shift in stance, with the young full-back hinting several times that he may be open to persuasion.

Asked if there was a possibility he’d return to Camp Nou in the near future, Bellerin replied:

It’s really nice to know of interest from a club like Barça, the club where I was raised as a youngster. Let’s see what happens.

The 22-year-old was then asked if he’d like to return from whence he came, were it up to him:

It’s something you do not think about when you leave, because you do not know how things are going to go.

I was lucky enough to join Arsenal and things went well.

Now to receive word from Barça makes me happy, but doesn’t depend on me.

Asked about life in London, Bellerin revealed that his family have recently upped sticks and returned to Catalonia for personal reasons.

I have always felt very good (about living in London). My family settled there with me, althought now they have returned to Barcelona for family matters.

Now I have a harder time, because I’m a very family-orientated person. I depend on them a lot, so it will be a new challenge to be without them.

He was then asked about his plans for the rest of the off-season:

A lot can happen this summer. For now I prefer to focus on the immediate, which is the European Under-21 Championship (with Spain) and then what has to come, will come.

I try to focus on my work, be focused on football. The other stuff (speculation) – when I decide, you will see.

Bellerin was then flat-out asked if he’d been in contact with anybody from Barcelona regarding a transfer:

You never know what can happen, but I have a contract in force (at Arsenal) and when I finish my holiday after the European Championship I will have to go back there.

Sounds to Pies like standard open-ended, non-committal ‘you never know’ fare from a player who clearly has at least one eye on a move back home.

Barcelona are in dire need of a proper right-back, and would no doubt be keen to acquire one they trained up in the first place. They’re in Bellerin’s DNA, after all.

Arsenal fans, prepare yourself for a wearisome summer of tap-a-tap-a-tap-a.