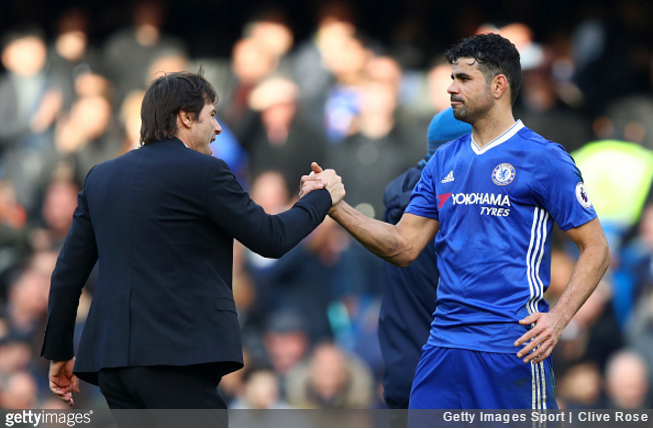 Diego Costa has revealed that he is hoping to leave Chelsea this summer after seeing his relationship with manager Antonio Conte deteriorate to the point of non-existence.

Indeed, the 28-year-old striker claims he received a text message from Conte after Spain’s 2-2 draw with Colombia on Wednesday to inform him that he will not be considered as part of the Italian’s plans at Stamford Bridge next season.

This despite ending the 2016/17 campaign as the Blues’ top goalscorer, with 26 goals in 46 appearances.

My relationship with the coach has been bad this season. I suppose I’ve had a bad season so I can’t go on.

I’m going to be honest, the other day, Conte sent me a message saying he does not count on me for next season, so I’ll have to find a way out.

I’ve already forwarded the message to Chelsea people to decide. You have to find a (new) team.

By his own admission, Costa would prefer to return to Atletico Madrid, but the club’s ongoing transfer ban may well hinder the prospect:

I do not know, it’s complicated, but people know that I love Atletico a lot and that I love to live in Madrid.

It would be nice to go back, but it’s difficult to be four or five months without playing.

It’s a World Cup year and there are many things to think about. I need to play, just that.

I have no preference for a league, I just want to play.

A weird one no doubt. We can only imagine what a pain in the derriere Costa must be to work with, but the guy gets results.

Obviously, Conte has other Lukaku-shaped irons in the fire but doing your dirty work via a cold, impersonal text message never reflects well.

Still, Conte is an ambitious coach who demands 100% of his players’ effort, heart and spirit.

He obviously feels he’s not getting that from Costa and so the cord has to be cut, no matter how ruthlessly.