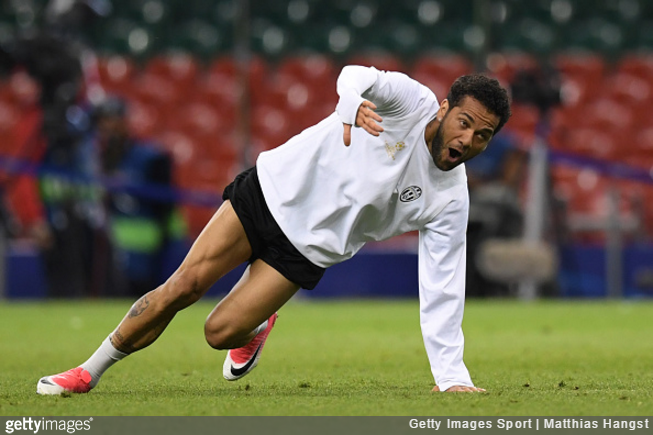 It may have come ever so slightly out of the blue, but it looks like Dani Alves will be moving to Man City in the very near future.

Alves only joined Juventus last summer and spent an incredibly successful year at the Serie A champions, endearing himself to fans while defying naysayers who cited his advancing years as a reason to be cautious.

However, after just one season in Italy, the 34-year-old Brazilian right-back is moving on – with Goal’s City correspondent Sam Lee reporting that he’s now “verbally agreed” a two-year, £85,000-a-week deal to once again chum up with Pep Guardiola…

Bit of an update: Alves has verbally agreed a two-year contract, awaiting confirmation of how he’ll leave Juve https://t.co/k7REFxr7s2

Alves is now in the process of negotiating his exit from Juve, with whom he signed a two-year contract last August. He will need to attain ‘free agent’ status before he is allowed to formally join City.

This from Lee’s report:

City sources expect the deal to be completed shortly, barring any unforeseen issues, and it is possible that Juventus will make their position on Alves official in the next 48 hours.

The whole deal is likely to cost City as little as £5million, which is an absolute bloomin’ bargain for a high calibre, vastly experienced veteran who can clearly still cut it from a physical standpoint.