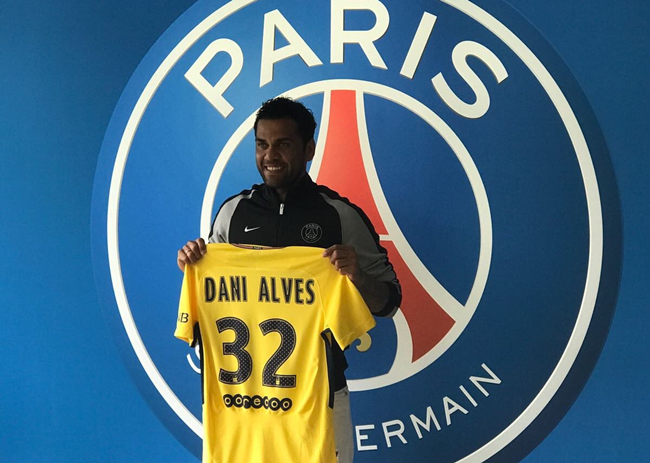 While it looked for all the world like he had one foot in the door at Man City just a fortnight ago, Dani Alves has instead signed for PSG today on a two-year deal.

The Ligue 1 side unveiled their latest acquisition at a press conference on Wednesday afternoon, leaving the man himself to start printing his own replica shirts up…

According to quotes being carried by L’Equipe, Alves had this to say for himself:

There was not only interest from Man City but from other English clubs.

I have often said the Premier League intrigues me a lot and there is a very interesting project there, too. I did speak with City officials.

But I have friends here [in Paris] and my wife loves this city. I was a little bit selfish when I went to Juve, I didn’t listen to my wife or friends.

This time, I tried to be less selfish and to please everyone. I believe in happiness – that’s why I made the decision to come here.

If Guardiola feels wronged, I apologise.

The word is that after hearing of City’s interest, PSG chucked an enormous £230,000-a-week contract at Alves – almost twice what City were offering in terms of salary (£120,000).

Given that he’s already 34, you can hardly blame the bloke for being swayed France-wards.