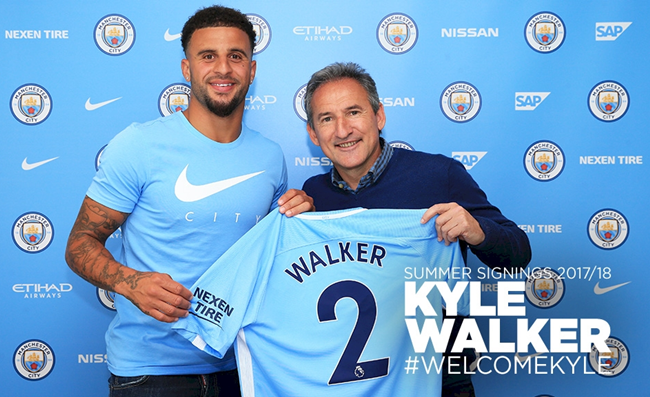 Kyle Walker has joined Man City in a deal that could eventually land Tottenham as much as £50million.

The initial fee is £45million, with another £5million in add-ons written into the small print.

Walker has signed a five-year contract at City and will wear the No.2 shirt that has laid vacant since previous incumbent Micah Richards was released in June 2015…

City have now bought three of the four most expensive defenders in Premier League history – Walker, John Stones (£48million) and Eliaquim Mangala (£42million) – all of whom still to this day face questions over their abilities to actually defend well on a consistent basis.

Still, the money is by-the-by these days, and it’s easy to see how Walker – a mobile, athletic, overlapping right-back – will fit seamlessly into Pep Guardiola’s preferred system. He’s the player they needed after losing out on Dani Alves, and Tottenham knew it.

Indeed, you’ve got to credit Daniel Levy again too, always coaxing top whack fees for his cast-offs. The deal looks even more impressive once you factor in that Kieran Trippier proved himself to be a perfectly adequate replacement for Walker towards the end of last season.

Question is now, what does Mauricio Pochettino do with this sudden and plentiful windfall?