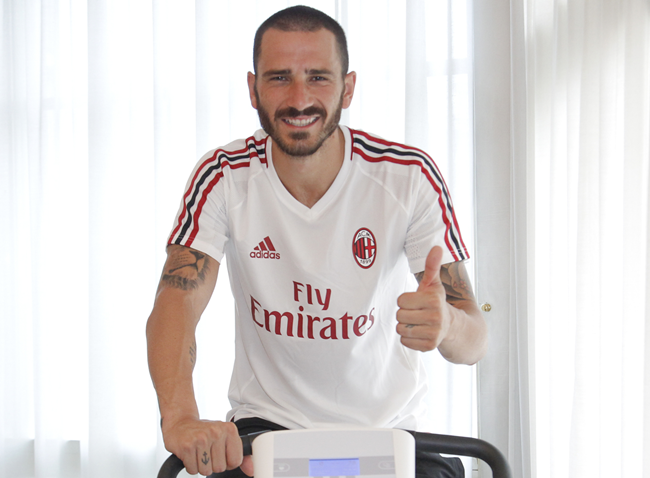 Leonardo Bonucci is now officially under the employ of AC Milan after completing his shock €42million transfer from Juventus today.

The 30-year-old defender has signed a five-year contract at the Rossoneri, with full-back Mattia De Sciglio going to Juve as part of the overall deal.

With that, Bonucci becomes only the tenth player in history to complete the clean sweep of Italy’s big three, having represented Inter, Juve and now Milan over the course of his career – the other nine members of this most exclusive of clubs being…

Baggio really hit his peak at Juventus between 1990-1995, but the emergence of Alessandro Del Piero saw him leave for Milan thereafter. The be-ponytailed icon then enjoyed a similarly successful two-season stint at Inter during the latter half of his career.

A brawny battering ram of a striker, Vieri really came to the fore at Inter after making strides at Juventus, Lazio and Atletico Madrid successively. After scoring over a century of goals in six seasons with the Nerazzurri, he duly spent a brief and largely joyless six months across town at Milan.

Pirlo mustered a mere 22 appearances in three loan-strewn years at Inter before blossoming at Milan (where he won two Scudettos and two Champions Leagues) and finally attaining languid cult hero status at Juventus.

After struggling to make much headway at Milan, the all-action Dutch midfielder subsequently became an integral part of Juventus’ ridiculously strong team of the late 1990s and early 2000s. Davids then saw out his time in Serie A with a patchy single season at Inter. He also played for Barnet too, which still seems utterly bonkers.

He may have been an infamously self-assured prodigy before, but it was during Zlatan’s time in Italy that he truly became an international totem. The Swede joined Juve in 2005 and proceeded to win five league titles in five consecutive years, the first two of which were stripped as a result of the Calciopoli scandal and the latter three coming after his move to Inter.

He then skipped over to Barcelona for a year, won the title, and then returned on loan to Milan, where he won the title.

Immediately before establishing himself as a midfield titan at Arsenal, Vieira spent an unfulfilling season on the books at Milan, where he made just two senior appearances after being plucked from Cannes by Fabio Capello.

After nine years at the Gunners, the Frenchman gangled back to Italy and spent a single season with Juventus before moving onto Inter, where he stayed for a further four seasons before returning to the Premier League to see out his playing days at Man City.

In the late 1970s and throughout the 1980s, Serena spent no less than four separate short stints at Inter during his fractious career. He also managed to squeeze in two stints at Milan (1982/83, 1991-93) and one with Juventus (1985-87) but always seemed to find his way back to his beloved Nerazzurri.

So good they named a stadium after him. Meazza spent 14 years as an Inter player, becoming a bona fide paragon of the club in the process. He also spent three seasons away from his beloved boyhood club in the early 1940s; two seasons with Milan (1940-42) and one with Juventus (1942/43).