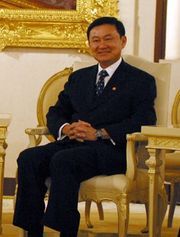 As expected, former Thai Prime Minister Thaksin Shinawatra has lodged a formal takeover bid for Manchester City. The bid is valued at Â£81.6m. The City board said it intended to support the bid from UK Sports Investments, which is controlled by Thaksin and members of his family.
Thaksin has to pass a Premier League suitability test before being able to complete the proposed takeover. But Thai prosecutors have recently filed corruption charges against Thaksin, so there is no guarantee that he will pass the test.
If the takeover goes ahead it would mean eight Premiership clubs would be in foreign ownership, with City joining Aston Villa, Chelsea, Fulham, Liverpool, Manchester United, Portsmouth and West Ham. [Via BBC]
Do you think Thaksin’s prospective takeover is good or bad news for City?