AC Milan’s teenage goalkeeper Gianluigi Donnarumma was reduced to tears at several junctures of Wednesday night’s Coppa Italia tie against Hellas Verona after his own fans unfurled a massive banner informing the youngster that they’d “lost patience” with him.

The 18-year-old stopper and his agent, the irrepressible Mino Raiola, are currently locked in an ongoing contractual wrangle with Milan, with Raiola attempting – as is his wont – to squeeze every last cent out of the Rossoneri.

The ill-will against Donnarumma has been swelling for some time, and the Verona match saw the youngster finally break when he was greeted with an enormous banner behind his goal during the warm-up at the San Siro. 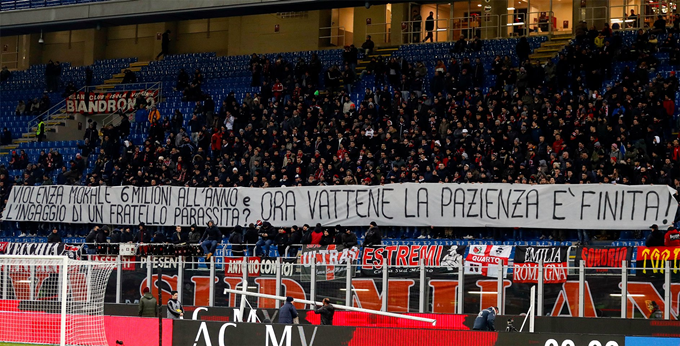 According to Italian Football TV, the translation reads as follows:

Psychological violence by giving you €6million a season and signing your parasite brother? It’s time to leave… our patience with you is over!

The banner refers to Raiola’s insistence that Donnarumma signed a new three-year contract extension under “immense pressure” from the Milan board. The contract was signed in July and made the teenager the third-highest paid player in Italian football.

Now, according to Corriere della Sera, Raiola’s lawyers are currently working to prove that Donnarumma only signed the deal after being subjected to “psychological violence” so that the deal can be mulched an a January transfer to PSG can be pushed through.

Either way, the banner obviously hit home, with cameras inside the San Siro dugout capturing club captain Leonardo Bonucci having to console the visibly upset goalkeeper before kick-off…

Footage of Bonucci with Donnarumma inside the locker room ahead of #MilanVeronapic.twitter.com/BVWFzccdCW

Milan went on to breeze to a 3-0 victory, though Bonucci was forced to repeatedly console Donnarumma as the jeering from the Curva continued.

So Raiola has disrupted a young man’s mental state, created an atmosphere around him so toxic that he evidently hates going to work and forged a seemingly irreparable schism between him and the fans of a club he previously enjoyed unshakeable ‘prodigy’ status at – all in the space of about a year or so.