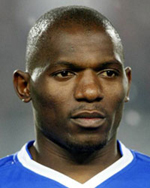 Chelsea utility man Geremi has emerged as the latest player Sam Allardyce would like to spend some of Mike Ashley’s millions on [that’s on wages and signing-on fees before some smart arse points out he is available on a free transfer!] . The Cameroon international is known to be eager to find more regular first-team action than he has been getting at Stamford Bridge.
The 28-year-old can play at right-back or in midfield and Big Sam is rumoured to be slobbering at the very thought of all the different positions he could have Geremi in. Middlesbrough have also been linked with a move for their former player, but have responded to the rumours with a bat as straight as a Gareth Southgate TV appearance.