Almost a decade on from his departure, Michael Owen is still widely begrudged by Newcastle United fans and with fairly good reason.

The striker’s four years at St James’ Park were riddled with injuries and the common consensus is that he simply gave up trying toward the tail end while continuing to siphon his vast wages from the club coffers.

Indeed, the following excerpt from Paul Ferris’ book ‘The Boy In The Shed’ reveals Owen’s general lapse attitude in the months leading up to the culmination of his contract.

Paul Ferris on Michael Owen in The Boy on the Shed. #nufc pic.twitter.com/2Rui5mpDx6

Still, this didn’t stop Owen’s agents, the Wasserman Media Group (WMG), from producing a glossy 30-page brochure with which to start hawking their client around various Premier League suitors in the final weeks of the 2008/09 season.

Were it not for an unhappy spell at Real Madrid and two injury-scarred years at Newcastle, he would be spoken about in the same breath as Torres and Ronaldo and valued in the priceless figures that only match-winning goalscorers ever justify.

Yes, that is a direct quote from the introduction.

The truth is that Owen was well past his prime by this point, but that didn’t stop WMG going all out to promote their semi-knackered, 30-year-old product to the likes of Everton, Aston Villa and West Ham, who were all reported to be interested at the time.

This was the result… 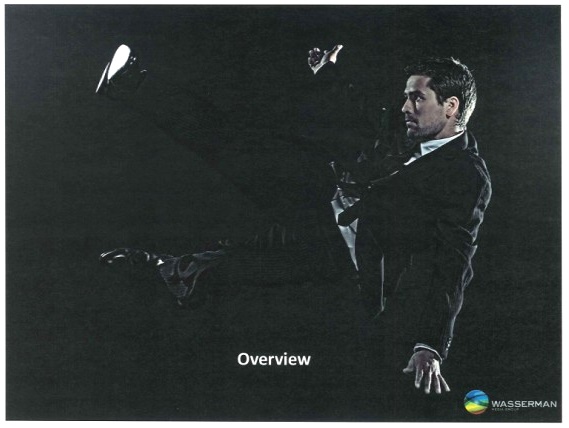 The index reveals that the brochure covered all bases, including global brand appeal, the truth behind the tabloid scandals, some football bits and bobs and the optimistic assumption that Owen’s England career was still ongoing (he last represented his country in March of 2008, when he managed 45 minutes in a friendly against France)… 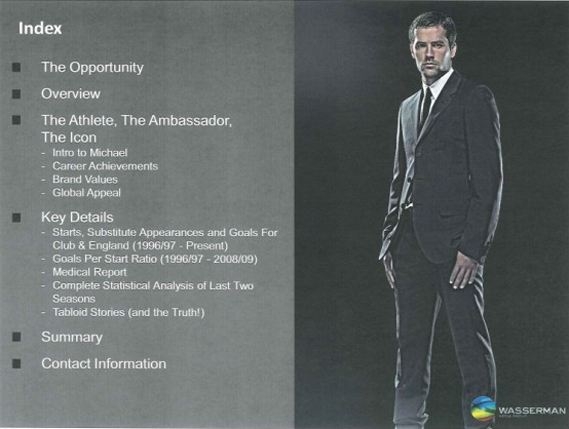 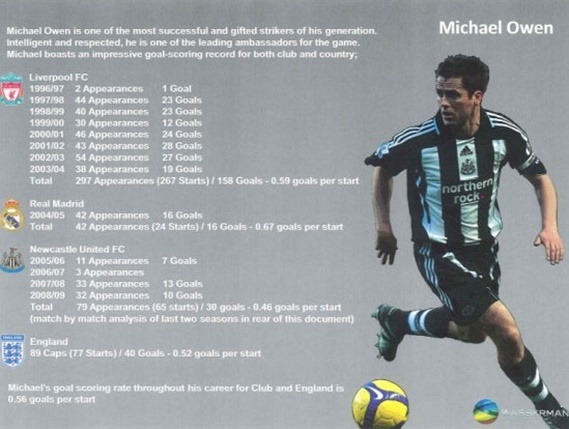 His footballing prowess may have been on the wane, but you really can’t fault his shilling skills.

Perhaps the most amusing page is the list of Owen’s “brand values”, wherein the WMG promote their man’s first class cleanliness, his timeless good looks and his cool articulation in a series of words apparently chosen from a dictionary at random… 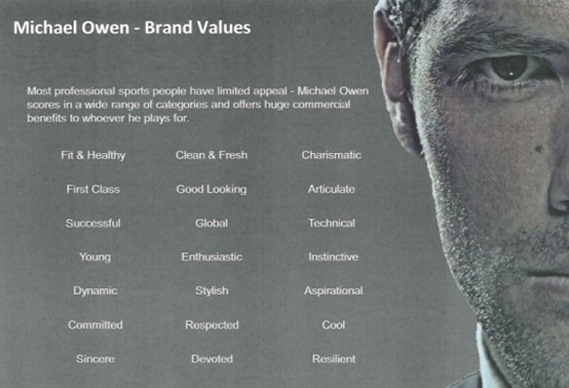 Just to note, the ‘fit and healthy’ striker was out injured for a combined 487 days during his stint at Newcastle – roughly 35 percent of the entire time he spent at the club, taking home £110,000-a-week all the while.

Laughable as some of the claims were/are, the brochure obviously worked like a charm as Owen subsequently signed for Manchester United on a freebie that summer, just one week after his Newcastle deal ran out – United presumably enticed by the prospect of signing a stylish young global technician for nowt.

The rest, as they say, is general apathy.