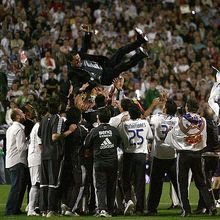 It looks like Darren Bent is off to White Hart Lane, for around Â£17m – yes, because he is worth more than Thierry Henry. If the move goes ahead, then the soon-to-be-ex-Charlton striker will have to fight Robbie Keane, Fat Mido and possibly Jermain Defoe for the right to partner Dimitar Berbatov up front. (Although surely this signals the end of Defoe’s stay at the Lane?)
I’d be very interested to see how Martin Jol rotates his strikers next season. Although Bent is an expensive acquisition, I’d imagine that Jol will stick with the Berbatov and Keane to start with, as he sees what Bent has to offer on the training ground. The obvious loser in all of this would be Mido, leaving Spurs with a very useful quartet of Berbatov, Kean, Bent and Defoe. But I can’t see that Defoe would be too happy to be a fourth-choice forward.
Is Bent worth that much? Probably not, but that’s the market in England. Bent scored lots of goals in a poor team, but that doesn’t mean he’ll score lots of goals in a better team. Do you think he’s up to the job?