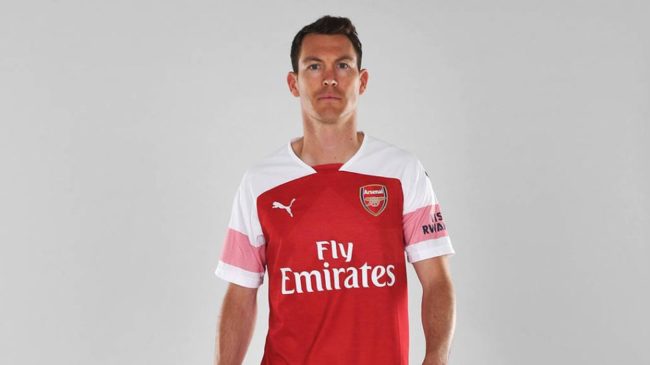 As expected, Arsenal have signed veteran defender Stephan Lichtsteiner from Juventus on a free transfer.

The 34-year-old won seven Serie A titles in his seven years with Juve and made more Serie A appearances than any other defender since his debut in the competition in 2008/09.

301 – Stephan Lichtsteiner has played more Serie A games than any other defender since his debut in the competition in August 2008. Experienced. pic.twitter.com/Capia8mMyJ

Lichtsteiner will captain Switzerland at the World Cup (he’s currently on 99 caps) and despite his advancing years, he will still bring a winning mentality to the Gunners, as well as a bucket-load of experience.

An attack-minded right back, Lichtsteiner also possesses a competitive streak, something arguably missing from Arsenal sides of recent years.

The Swiss star, who will provide competition for Hector Bellerin in the right-back berth, becomes Unai Emery’s first signing for the Gunners.

On securing the services of Lichtsteiner, Emery said:

Stephan brings huge experience and leadership to us.

He’s a player with great quality with a very positive and determined attitude.

Stephan will improve us on and off the pitch.

On making to move to north London, the player himself said:

It’s a great moment. It’s great for me after Juventus to come to Arsenal and have this big challenge to make big things happen with this big club.

If you see the players, if you see the club, the stadium… it’s the project, the big opportunity to get back to the highest level.

I hope I can bring a lot of experience, a lot of mentality and together, with my team, come back to the highest level of the Champions League.

While hardly the kind of marquee signing to get Arsenal fans excited, Lichtsteiner is exactly the sort of character the Gunners have missed in recent seasons and could well be a shrewd, and cheap, first purchase by Emery.