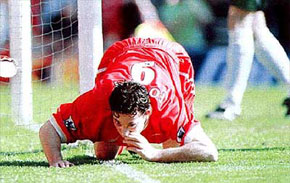 He may be revered as ‘God’ in Scouse circles, but it seems not everyone has as much faith in Robbie Fowler anymore. Liverpool’s favourite prodigal son looks set to start the season homeless after not receiving any offers from another club for the first time in his career.
The Liverpool striker has been released after a second spell with the club he calls home but has vowed to carry on playingâ€¦if anyone will have him.
He said, “I’ve had no offers and I haven’t got any options. I’ve had a few injuries in my career, but whether that has scared off a few clubs I don’t know.”
Fowler continued his self-promotion by saying his goalscoring record ‘speaks for itself’. And that record? Eight goals all season â€“ not to be ‘sniffed at’ apparently.