Usain Bolt might finally be set to land his first professional football gig with reports from Australia claiming the Olympian is on the verge of signing for Central Coast Mariners.

The Mariners missed out on signing Fernando Torres last month so it’s only logical that their back-up be a 31-year-old retired athlete whose footballing experience extends to scoring awkward penalties in PR-friendly ‘trial’ sessions with various Puma-affiliated clubs and outsprinting Coronation Street actors in charity exhibition matches.

According to the Australian Daily Telegraph, Bolt is close to close to inking a deal with the A-League side that will see him join on an initial six-month “audition” that could then transform into a “season-long affair” if successful. 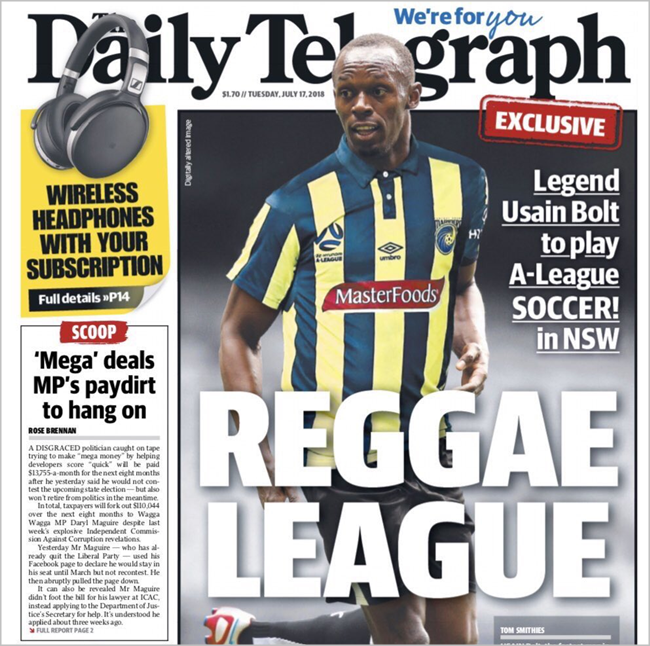 The paper also claim that Bolt will sign a short “marquee” contract which A-League chairman Greg O’Rourke is hoping will boost dwindling attendances and viewing figures going into the new season.

Speaking at a business function back in May, O’Rourke announced that the league are planning to double their marketing fund and relaunch the “multi-million dollar super marquee fund” that was previously used to lure big-named draws like Alessandro Del Piero, David Villa and Emile Heskey to play down under.

While signings like Bolt might spur an initial curiosity, surely ploughing millions of dollars into turning the A-League into an novelty circus sideshow isn’t the most sensible long-term plan.