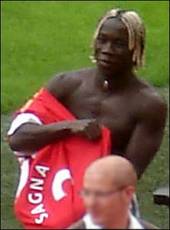 Bakari who? you may well ask. Bakari Sagna, that’s who. He’s a 24-year-old right-back, signed by Arsene Wenger from Auxerre, for a reported Â£6-7m. Sagnaâ€™s arrival, on a five-year contract, may herald a move into midfield for the ever-likeable Emmanuel Eboue, particularly as Freddie Ljungberg looks set to leave the Gunners for Fiorentina.
This blurry pic, of Sagna apprently trying on the No.3 shirt, appeared in today’s Sun. So who is Sagna? Well, he’s a very highly rated French defender, who can play at both right- and left-back. According to the Independent, ‘Sagna is confident that despite the competition he will earn his place in the side at the Emirates Stadium claiming that “I have not left in order to sit on the bench”.’