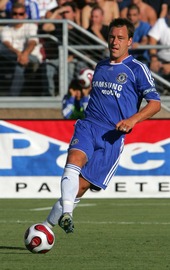 Some good news and some bad news for Chelsea fans. First, the bad news: Chelsea skipper John Terry reportedly broke a toe in the 1-0 win over Suwon Bluewings in LA on Wednesday. JT played on until half-time when he was taken off in a pre-planned substitution. It has been claimed he was given a painkilling injection and could return to face LA Galaxy on Saturday, but it remains to be seen whether or not the injury will prevent Terry from starting the Premiership season.
The good news is that Terry has apparently agreed to sign a new, improved contract to keep him at Chelsea. The Sun claims that the England captain will now be paid a staggering Â£131,000 a week, making him the best-paid player in England. He is currently on Â£68,000 a week (poor lamb), so the new deal almost doubles his wage. But is he worth it – would you have agreed to pay him that much to keep him at the Bridge?