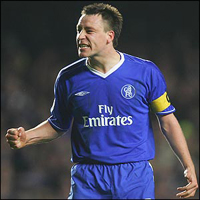 There’s tough and then there’s John Terry. Despite breaking his toe during Chelsea’s pre-season jolly against the Suwon Bluewings, he played on and still expects to be fit for this weekend’s game against Beckham’s LA Galaxy.
Meanwhile, poor David still might not make the game because of a slight strainâ€¦diddums. Terry is obviously made from sterner stuff but we remember him coming back too soon after literally having his head kicked in by Abou Diaby last season, which put him out again and could have cost Chelsea the title.
Hard as nails or just trying too hard?