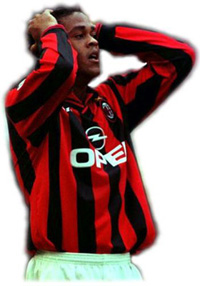 Ajax, AC Milan, Barcelonaâ€¦er, Sheffield Wednesday. Former Dutch superstar, Patrick Kluivert has played for some of Europeâ€™s greatest clubs but his fall from grace seems to have almost reached rock bottom.
Since coming off the bench to score the winning goal in the European Cup Final at 18, poor Patrickâ€™s love of partying has seen him thrown out of a few clubs â€“ some where he was actually supposed to be playing football.
He decided not to take up a second year option at Newcastle in 2005 but has apparently rekindled his love for the English game with a chance to join Championship side, Sheffield Wednesday â€“ although, even they want a look at him first. How the mighty have fallen?