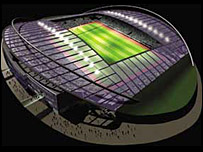 Brighton, home of pebbled beaches, dirty weekends, men in makeup and now a new football stadiumâ€¦hopefully. As a Brighton resident, weâ€™ve been waiting for this news for years but it seems the Seagulls can finally come home to roost.
Brighton and Hove Albion have been given permission to build a 22,000-seater stadium in nearby Falmer after planning approval was passed today. The League One side have been without a permanent home since 1997.

Chief executive, Martin Perry, is understandably excited but still wary. â€œIt isnâ€™t green for go just yet. Weâ€™ve already had one false dawn; as our supporters already know all too well we have been here before,â€ he said.
Thatâ€™s a reference to 2005 when the club thought it been granted permission for a new stadium only for an error to have the decision quashed. Local residents and councils could still contest the decision but ,as the stadiumâ€™s grounds no longer exceed National Park boundaries, Seagull fans can feel more confident than the team have appeared on the pitch recently.
Via
BBC news