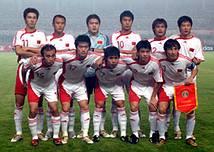 New Birmingham City owner, Carson Yeung, has a dream â€“ but weâ€™re not sure itâ€™s one that will help Blues fans sleep any easier tonight. Apparently, the Hong Kong-based tycoon wants to eventually put out a team featuring 11 Chinese players.
“China has some good players but I don’t think they have the right attitude,” he said. “They stop progressing, they think too highly of themselves.â€
He obviously hasnâ€™t had a chance to meet potential signing and pie eating ambassador, Mido, yet then.
Although our Far Eastern friends are fast and skillful they donâ€™t have the most rugged of physiques and, with an average height of around 5ft 7in, corners could be a problem. What do you think?