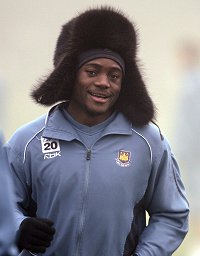 Thereâ€™s nothing like a warm welcome but Villaâ€™s Stiliyan Petrov seems to be clouded by claret coloured spectacles in his praise of new signing, Nigel Reo-Coker.
Petrov said without a smirk, ‘Nigel is a great player, and I was surprised that West Ham let him go because he’s one of the top midfielders in the world.
‘He’s the type of player who has a great heart, superb ability and he never gives up. To have someone in our team like that is great.
Riiight, is this the same Reo-Coker that only scored a single goal last season, was blamed for West Hamâ€™s early laurel resting and showed his â€˜never say dieâ€™ commitment by promptly handing in a transfer request?