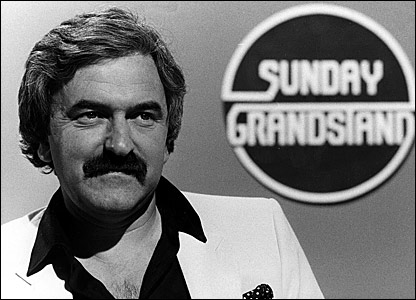 He left sports broadcasting on the Beeb for the money, sorry challenge of ITV and then hot-footed it to Countdown on Channel 4 faster than anyone can say â€œRobbie Earle â€“a football pundit?â€ And now silver fox, Des Lynam is going back to what he does best â€“ footie.
Des will front a big advertising campaign for Setanta Sports, letting people know about their new Premier League football coverage. Details of the advert have been leaked and apparently the TV spot will see Des waxing lyrical on the new subscription TV sports service, whilst selling pies from a caravan parked outside a footie stadium. Oddly enough, he will be accompanied by Big Brotherâ€™s Thaila Zucchi (who?) in his catering career and rumours abound that now heâ€™s on board with Setanta, he might sign-up full-time to front their live coverage.
Thatâ€™s all very well, but times have changed since Des was last in the game. Would he be prepared to de-fuzz his hands like Richard Keys if such demands were made?