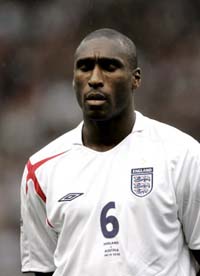 What started as a new regime is starting to resemble an old school reunion in Steve McLarenâ€™s England camp. First, Becks was brought back from the brink and now it seems Sol Campbell could be making a comeback.
Like Beckham, Campbell was cut from the England squad after Svenâ€™s 2006 Word Cup but a spate of injuries could see the one-man mountain getting a recall for this monthâ€™s friendly against Germany.
John Terry and Ledley King are definitely out, there are the usual fitness concerns over John Woodgate and Jamie Carragher is upset at constantly being overlooked.
After his funny turn at West Ham that paved his way from Arsenal to Portsmouth, Campbell has been impressive down south â€“ even if he was occasionally upstaged by Linvoy Primus.
Desperate times require desperate measures, but weâ€™re not sure that Sol is still the player he once was and surely there are a new crop of young central defenders ready to be given a chance. At this rate, David James will be back between the sticks before long.