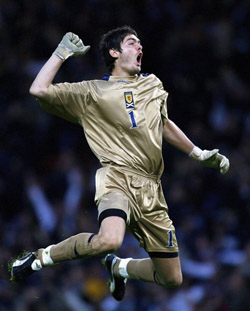 Roy Keane has broken the British transfer record for a goalkeeper by signing Craig Gordon from Hearts for an astonishing Â£9 million.
Itâ€™s also a record fee for the Black Cats, beating the Â£6.75m they paid for beanpole striker, Tore Andre Flo, five years ago. We assume Keane is expecting heavy traffic in his teamâ€™s penalty area this season but it sounds like a lot of money for a youngster thatâ€™s never played in the Premier League.
Aside from the astronomical Â£23m that Juventus paid for Gianluigi Buffon, keepers tend to be more affordable than most â€“Â and even previous World Cup winners like Fabien Barthez cost less than Gordon.
So, is Sunderland right to splurge so much between the sticks or would the money be better spent on someone to actually score the goals they’ll need to keep them up?