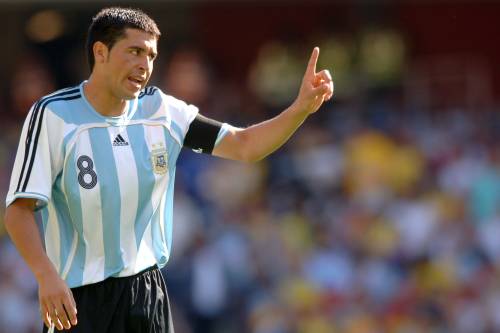 Argentinian midfielder (and star of commentator Ray Hudson‘s liquid dreams) Juan Roman Riquelme would appear to be on the verge of sealing a shock move to the Premier League with West Ham, if the player’s agent Barry McIntosh is to be believed.

The 31-year-old former Villarreal star is ready to return to Europe after spending the last three years of his career playing in his homeland with Boca Juniors, and McIntosh has confirmed that no less that five English clubs have inquired as to his client’s availability, although West Ham remain his favoured destination;

“There are at least four other English clubs in the equation, but I think the location of London, the challenge at West Ham and working beside the likes of Scott Parker and Thomas Hitzlsperger have been very important factors in him considering the move.

Right now, we think the best option, the most likely, and the one he’s most interested in is West Ham.

I think for a foreign player of the magnitude of Riquelme, the lure of London is always going to be a deciding factor over any other club so, unless Arsenal come in, then I think the most likely destination and the one Riquelme would be most interested in is West Ham.

[A move] was unlikely a few weeks ago because Riquelme’s No.1 club, where he is an idol, is Boca Juniors. He played for them on very small financial terms to satisfy the fans.

But it’s come to the position now where he feels he may have to look at all the other options that are being offered to him because he doesn’t feel like he’s getting value for money in terms of staying at Boca.

That has alerted a number of other clubs from Brazil to Europe and even in Qatar, offering multi-million pound deals.

But I think he’d like to be a part of the project of West Ham, and what David Sullivan and David Gold have got in mind for the future for the club, including the new stadium.

He wants to go to a club where he’s going to make a mark.”

Sounds slightly ominous to me. Let’s just hope that the mark he leaves isn’t akin to the mark left on West Ham the last time they signed Argentinians that they couldn’t really afford.