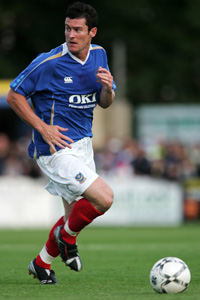 â€˜Arry Redknapp is renowned for his wheelinâ€™ and dealinâ€™ skills but even a master sometimes makes mistakes like, â€˜buying the first one you see before the end of season sales arrive.â€™
Thatâ€™s the situation Portsmouth appear to be in after admitting they could sell David Nugent just a month after signing him â€“ and even his goal in last nightâ€™s Carling Cup match against Leeds might not make a difference.
Nugent had plenty of suitors during the summer including Derby, Sunderland and his boyhood idols, Everton, but Redknapp persuaded him down south â€“ before he realized who else would be available.
Apparently Redknapp wants either Nicolas Anelka or Jermaine Defoe, and is prepared to cut short Nugentâ€™s Pompey career to get his man.
Is Nugent really that bad or is this just the cutthroat reality of the Premier League?